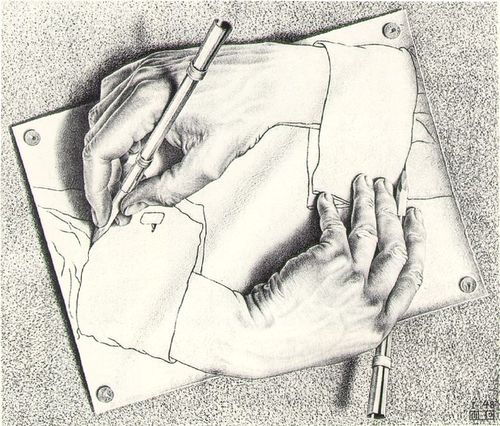 Douglas Hofstadter, in Godel, Escher, Bach and I am a Strange Loop, weaves a pretty compelling tail of how mind and consciousness emerge from self-referential systems configured in a kind of "strange loop." Our consciousness or possibly all consciousness may emerge from this sort of feedback loop with strange interplay between levels.

From a very early point in our MetaCurrency work we identified an underlying pattern of co-emergence and co-creation that seems make for very interesting bootstrapping dynamics – the ability for complexity to emerge from simplicity. In our internal shorthand, we refer to this as "two hands writing" in reference to M.C. Escher's vivid illustration of this principle.

Not too surprisingly, it turns out that this kind of self-referential feedback loop is central to the architecture of Ceptr. I tried to summarize it in brief, dense prose in the Ceptr Revelationdocument, but for most people, a bit more explanation and examples are probably necessary to understand it better. I'm going to try to lay it out more clearly here.

For Ceptr, the strange loop comes from our solution to the problem of infinite regress. Just like you could say that in the world, every object exists in some space – a space that gives it room and orderly structure out of which its existence is built.

Well... yes and no. In the case of Ceptr, it happens that the solution comes from a strange self-referential way that receptors, which are VIRTUAL machines, all have to run on some PHYSICAL device. And those PHYSICAL devices all must have addresses in the VIRTUAL space of the Ceptr Network to be able to route messages and talk to each other.

In some ways this is really clear and obvious. It is also quite profound. And I think the way that we implement it in Ceptr, makes the profundity more clear than current networking protocols do.